Pumping out large volumes of water from mine in PNG

This Papua New Guinea gold mine is an open-pit mine located within one of Lihir island’s large volcanic calderas, which borders the sea. While the volcano is considered extinct, it is still geothermally active with smoke emanating from the rocks within the pit. Due to the pooling of rainfall and regular seepage of seawater through the crater rim into the pit, the pit needed to be pumped out in order for the mine expansion plans to go ahead.

The ultimate design was a dewatering system that used 3 x 350 kW submersible bore pumps inside an angled poly-pipe casing suspended from 8” Flexibore®. In addition, each pump was driven by a separate generator and connected to a platform, which cantilevered over the pit wall. 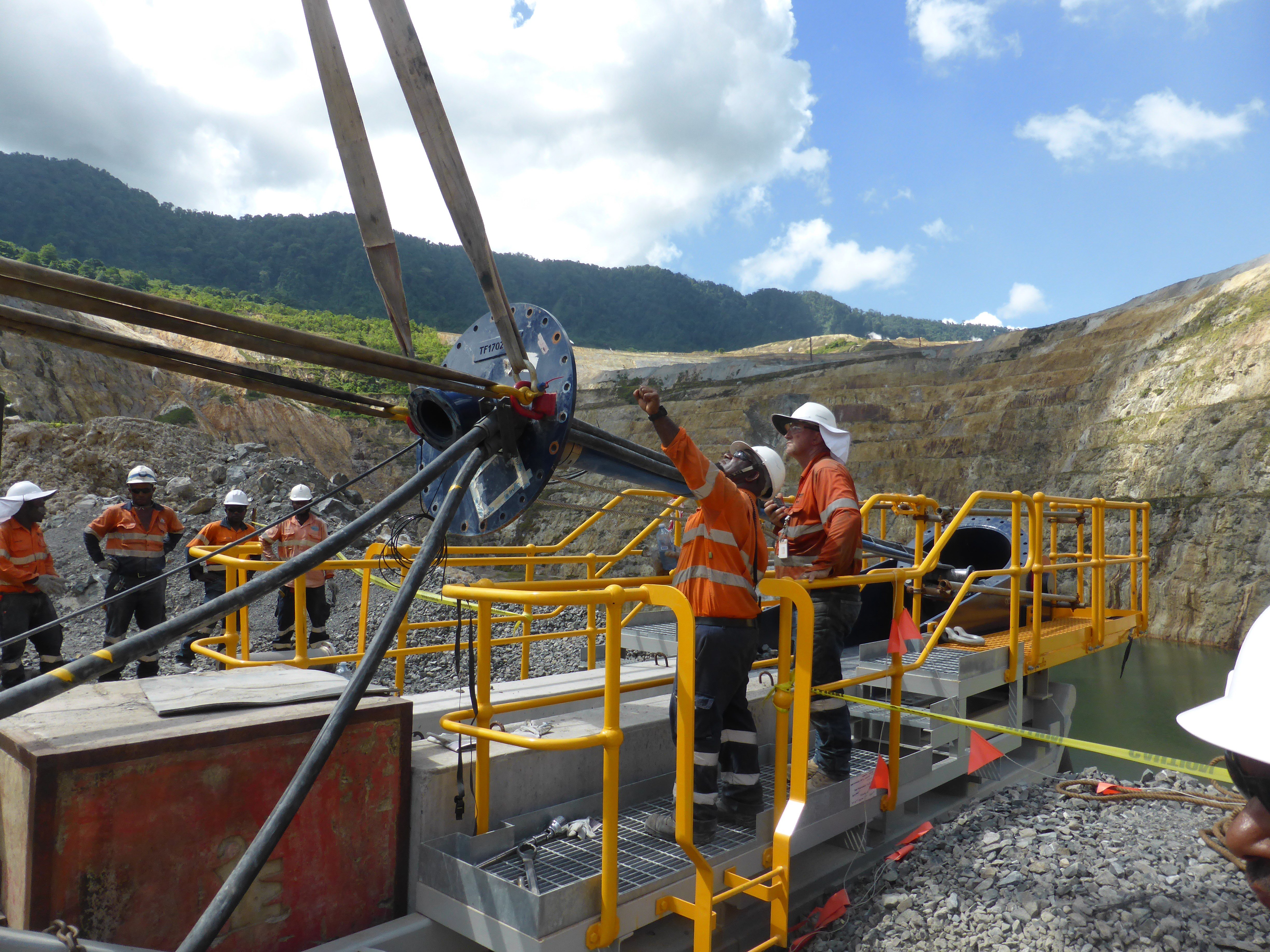 The angled bore casings were made with 900mm diameter poly-pipe sections welded together to form an insulation sleeve. These rested at an angle along the pit slope. The length of poly-pipe into the pit was 175m long and the water level was about 45m below the headworks. The bore casing was then securely anchored from the headworks, which incorporated a concrete-padded, steel-framed platform, which was surrounded with safety rails.

Each 350 kW stainless steel submersible pump was mounted on a skate which slid within the casing, allowing the pumps to be let down inside the poly-pipe. The pumps were connected to Flexibore®, which suspended each pump under its own weight, as it was lowered 175m into the pit.

“As the hose is manufactured from woven fabric that acts like a lifting sling, a high tensile load of up to 16 tonnes can be suspended from it,” said Francois Steverlynck, Managing Director of Crusader Hose. “The hose is also supplied in one continuous length making for easy installation over a roller while clamped from a crane. The 8” Flexibore® also has a burst pressure of 440m, which was well within the design pressure for the project.”

With the submersible pumps safely lowered inside the poly-pipe casing, they were then connected to the diesel generators via the power cables attached to the Flexibore® hose. Settings and flow rates were controlled until each pump attained a flow rate of 168 litres per sec. The CAT diesel generators were supplied by Taranis Power of WA.

Gabriel Hoascar, the engineer from Taranis who connected the pump cables and fired up the generators, said, “I was impressed at how efficiently the system worked. Our company will look for more opportunities to partner with such a reputable supplier as Crusader Hose.”